In this workshop, you will make a game about finding Bigfoot. It will look like this:

Links to a live demo and the final code below. This workshop should take around 1 hour.

On the way, you will:

Set Up the Project

Get Images for the Game

Now you're all set with the images you'll need!

What needs to be in a game about finding Bigfoot? Well, it needs Bigfoot, and it needs to tell the player when Bigfoot has been found.

Taking Bigfoot Out of His Natural Habitat

Luckily for you, we've done the hard part of wrangling him out of the jungle and putting him in captivity on the Internet, and Bigfoot can be found in your repl.it project :)

So now you have to put an image of him into your game, like you did in the Personal Website workshop. To add an image, we use:

When you're done, you should see Bigfoot in the live preview, like this:

Telling the Player When Bigfoot Has Been Found

A game needs interaction in order to be a game, so let's display a pop-up box whenever the player clicks on Bigfoot, like this:

How can you do that?

One of the most important skills towards becoming an independent hacker is knowing how to Google things when stuck. So let's start by Googling "HTML handle click": 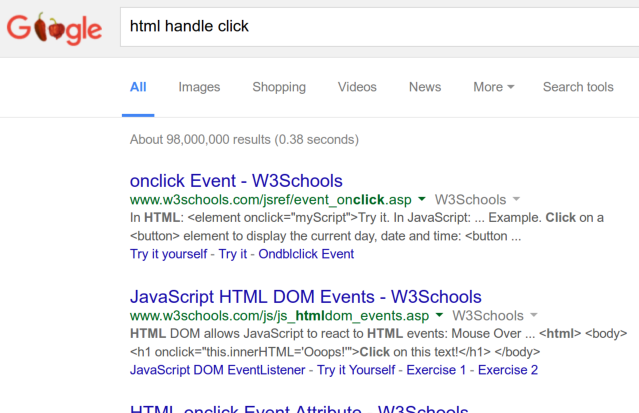 Aha! It looks like whenever you put onclick="myFunction()" on a tag such as button or img, it executes the JavaScript code you put in the quotes whenever that tag is clicked on.

The first link takes you here:

It looks like when you run alert("I am an alert box!"); it opens a pop-up box showing the text inside the quotes. So if we put 2 and 2 together, our img tag should look like this:

Oops, it didn't work! Why could that be?

Another important skill when hacking is knowing how to fix stuff when they go wrong. repl.it gives you a hint: the quotation mark after alert( has a red underline.

Here's what went wrong. We expected the quotation mark after alert( to indicate the beginning of the message, but what it actually did was indicate the end of the onclick attribute.

Here's a little trick you can use to fix that. In JavaScript, you can use either " or ' around text (the technical term is a string). So change the inner quotes to single quotes, like this:

And now clicking Bigfoot should display the message.

At this point, your <img> should look like this:

Congratulations, you have a working game now! You're all done! Now you can go to FGL and sell your game to sponsors and make millions of dollars!

I guess you spotted the problem already. This game is way too easy! I mean, Bigfoot is just sitting there out in the open, begging for you to click on him.

Putting Bigfoot Back in His Natural Habitat

That must be because we took him out of his natural habitat. You see, normally Bigfoot is hiding in a dense forest, making it hard to find him. Let's fix that by adding a background image of a forest. We already uploaded forest.jpg, the image we'll use.

When you are making your own projects, you won't have workshops telling the solution to every step. So this time, let's practice your Googling skills and see if you can figure out how to set that background image without being told the solution! After adding the background image, the live preview looks like this:

When you are done, or if you are simply really stuck, we've included a sample solution below. (But there are other ways to add the background image, so if your solution doesn't match mine, that's OK.)

There are several ways to add the background image. Here is one way:

That's much better! But the top left corner is a pretty boring place to hide Bigfoot. Can you figure out how to set Bigfoot's position to somewhere else? This one is harder, and may take some trial and error, but it's really worth the effort to see if you can figure it out yourself. Afterwards, Bigfoot's position will be somewhere in the middle of the forest, rather than the top left corner, like this:

OK, got it working? If you need help, try asking your neighbor or workshop leader for hints.

Let's walk through the steps of one way of solving this.

The first link takes you here:

It has some CSS code showing how to "position an <h2> element":

Right now Bigfoot loads before the background image does unless you have a fast internet connection and we don't want that! We're going to fix that by running code only after the page has loaded.

Just like how we ran code when someone clicked using onclick, we're going to call a function once the page has loaded with onload. You can look this up by Googling "on page load". Lets go ahead and make a script tag for our new function in the JavaScript file, script.js:

We should also go ahead and add the onload attribute to the body tag. There are a couple more things we have to do. First, go ahead and get rid of src tag, as we will be adding that with the function. Then, add an id to the img tag. This is so we can change the src attribute after the page loads.

Now, lets get a hold of the img tag and change its src to our friend Bigfoot.

Bigfoot should now load after the background. We did it!

Feel free to experiment with the left and top values to find a good place to hide Bigfoot.

Now we have another problem. This game is… too easy. Once somebody plays it once, they’ll be able to beat it over and over again with no challenge! We need to write a function that will move bigfoot randomly around the page after you beat it.

Now remember, we’re trying to move bigfoot randomly around the screen. So the first thing we need to do is make a variable that will get our image. Like earlier, we’ll use “document.getElementbyId.”

This will help us out later on.

There’s a couple different ways to solve this, but we googled “generate a random number in javascript” and went to the first result, which told us to use Math.random()

So since we have two numbers to generate (for left: and top:) we need to create two new variables for those values.

This will generate two random numbers between 0-300 whenever the function is run.

Now that we have our two numbers, we have to actually make them apply to our picture variable. Here, we’ll use the style left and style top property.

This will take any images that follow the parameters of the picture variable (which is just finding the id bigFoot) and set the top and left position to the random numbers that it generates.

Next, back to our html file. We need to make it so that whenever we win the game and find Bigfoot, the moveBigFoot function will be called and it’ll move him to a new location based on the two numbers we just generated.

Let’s create a new onclick method in our <img> tag in the html file.

Now let’s try and run that and see if it works.

Okay. Let's see what we can do about that.

So now, our new <img>in the html file should just look like this

And our moveBigFoot() function in scripts.js should look like this

Now let's try it. Go ahead and click on bigfoot.

Did the alert pop up? Yes?

And now did Bigfoot move?

Congratulations, you have a working game! You're all done!

Most importantly, by practicing Googling stuff, you are on your way toward becoming an independent hacker.

Now is the chance to make the game into your own! For inspiration, you can look here to see what's possible.

Edit this page on GitHub